What is a tree?

We all know how to recognize a tree, even from far away and from the tender age. When asked to give a formal definition, however, often all our certainties begin to creak.

According to books and dictionaries, the definition of ‘tree’ ranges a lot. From a botanical perspective, in Thomas (2000), ‘tree’ is defined as a plant with a self-supporting woody stem, which lives for more than a year. According to Raven et al. (1986), ‘tree’ can be a perennial woody plant, generally with a single stem (trunk). But, as Hirons and Thomas (2018) pointed out, many ‘trees’ have multiple stems and, in any case,

we would not call them shrubs; furthermore, other ‘trees’ are not self-supporting for most of their life, such as certain figs (Ficus) called ‘stranglers’. In Cox (2011), the ‘trees’ are distinguished from other plants by the fact that they have woody stems, referring to the secondary growth produced by the division of cambia; shrubs also have this characteristic but differ from the ‘trees’ in that they cannot get much taller than 6 m and that they are usually multi-stemmed from close to the ground. But the same author highlights the limits of this definition: in mountainous regions, for example, there are plants (such as Pinus mugo Turra) that can be only a few tens of centimetres tall but which are still considered to be ‘trees’, in the same way that bonsai trees are classified as ‘trees’. It is also interesting to note that the roots, an essential component of a tree, are usually omitted from the definition of the tree itself (Bernatzky, 1978).

In support of the lack of clarity and uniqueness of the definition, it should be noted that in texts of evolutionary systematics (e.g. Campbell and Reece, 2004) or of plants’ identification (Pignatti, 1982; Judd et al., 2007) these characteristics are little considered for classification purposes, while much importance is given to more objective characteristics such as the floral formula or the type of seeds and leaves.
The definition of the term ‘tree’ could, therefore, be the subject of a plenty of debate. As suggested by Hirons and Thomas (2018), perhaps the most useful definition could be the one proposed by the judge Lord Denning within a judgement under the “UK Town and Country Planning Act”: “Anything that one would ordinarily call a tree is a ‘tree’”.

Why are some trees so tall?

Height is a crucial component of the ecological strategy of a plant species. Height is one of the major determinants of the tree’s ability to compete for light, a source of energy necessary to carry out photosynthesis at the level of the leaves or young twigs. Trees cannot move as animals do and therefore the only way to get the light necessary for their life is to grow in the direction of the light stimulus (positive tropism).

Generally, as they get taller the trees try to occupy spaces with more light, until they reach the canopy of the forest and no longer have to compete for the light with the neighbour plants (of different species or of the same species; Sterck and Bongers, 2001).
Trees can be strong competitors with other woody plants and herbaceous vegetation, depriving the lower plants of light. Tall trees often have deep and extensive root systems that allow them to grow in hostile environments, extracting water and nutrients from the soil more efficiently than other lower plants (Bovey, 2001). 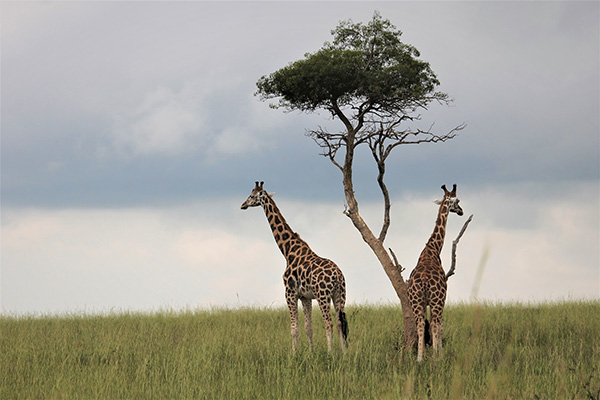 The height of a plant is an important part of a coordinated suite of evolutionary traits that also include the time to reproduction, the number of seeds produced per year and the longevity (Moles et al., 2009); from the evolutionary point of view for heliophilous species, only the tallest individuals of the others, who win the fight for light, manage to accumulate enough energy for the reproduction.

In plants, energy investment for height growth to improve access to light, however, entails significant construction and maintenance costs for the stem. The secondary growth of the woody stem becomes fundamental to obtain a rigid structure capable of supporting an architecture of the shoot system in expansion, not only for the static load of the weight itself but also to resist dynamic forces (e.g. wind) or attacks by pathogens (Hirons and Thomas, 2018).

But secondary growth also allows to increase the transport capacity of water and mineral salts towards the leaves and the movement of carbohydrates in the opposite direction (Mauseth, 2006); consequently, the plant can produce a greater number of leaves and roots and increase its photosynthetic activity rate.

Since the tallest trees are also those trees with the highest metabolic rate and with the greatest production of new biomass, the height of the plant also influences important characteristics of the ecosystem, such as the carbon sequestration capacity. At last, the height of a tree is also positively correlated with animal diversity (for example, the number of bird and mammal species that can live or feed on high foliage).
Of course, as with many laws in nature, there are important exceptions. Some species, such as Taxus baccata L., with slower growth, have developed a different evolutionary trend. They are unable to promptly monopolize the gaps in the canopy and must survive periods of lack of light, expanding only when a sufficient quantity of light is available, until they reach maturity (Sterck and Bongers, 2001). These shade-tolerant species manage to live (or survive) in the shade of other trees thanks to the adaptations that they have evolved: for example in their leaves the ratio chlorophyll a/chlorophyll b is lower, the chloroplasts are bigger, the leaves thinner and the stomata larger than in heliophilous species (Givnish, 1988).

Why do some trees lose their leaves in the fall?

World zones in the middle latitudes (between 40 and 60°) have a temperate climate, characterized by large temperature oscillations on a daily, monthly and annual scale and a seasonal variation of the photoperiod (duration of the day; Vitasse et al., 2014). To thrive in such climates, organisms must face a cold winter by applying very different survival techniques.

Some animals enter the hibernation with the arrival of autumn and then winter, to shelter from the severe climate. In fact, some species would not have a body prepared to endure the cold, others would not find enough food to feed themselves and keep warm; these animals take refuge in their lair, they slow down vital functions and survive by consuming the reserves accumulated before winter.

For most perennial plants, the cool autumn temperatures cause the onset of a chain of responses that prepare themselves for the cold and stressful winter conditions (“cold acclimatation”), increasing the chance of survival of the plant itself (Mauseth, 2006). Similar to the hibernation of animals, in temperate zones, dormancy is a mechanism that trees use to survive unfavourable environmental conditions, thereby protecting sensitive tissues (Campony and Egea, 2011; Vitasse et al., 2014). Dormancy is addressed differently by two main categories of trees: deciduous trees and evergreens.

In deciduous trees, the leaves die and fall more or less all together in the unfavourable season, generally autumn, leaving the trees bare and ready for dormancy (Mauseth, 2006). But careful observations reveal that “dormancy” involves many phenomena, which begin much earlier. 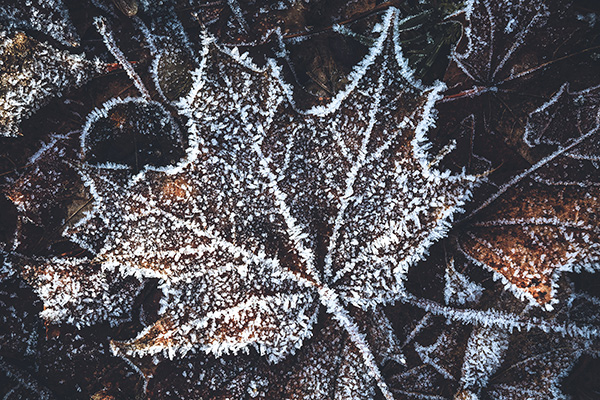 During the vegetative growth in spring and summer, energy reserves (e.g. starch) are accumulated in the plant’s storage tissues. Two or more months before the fall of the leaves, terminal buds are also formed, ready for the following year (Perry, 1971). When autumn arrives, the senescence of the leaves is mainly induced by the decrease in the daily number of light hours (photoperiod); only a few species, like Liquidambar spp., respond mainly to changes in temperature (Hirons and Thomas, 2018). Autumnal leaf colour change transforms entire landscapes into a mosaic of yellow, orange and red (Archetti et al., 2008). The useful molecules (e.g. minerals) present in the leaf are resorbed back into the tree; only later, at different times depending on the species, an abscission zone forms at the base of the leaf, allowing the leaf to detach itself or with the help of the wind. During dormancy all metabolic processes are slowed down but not stopped: although for example there is no internodal elongation, the buds formed in autumn can grow during the winter months, as well as the roots when soil temperature and humidity are quite high; in addition, the bark, twigs and branches containing a large amount of chlorophyll can contribute to photosynthesis, and cellular respiration is not stopped. When will dormancy be interrupted? Most of the deciduous species resume the vegetative growth following the achievement of the requirement in cold and then of the requirement in hot, fundamental values thoroughly studied for fruit trees (Perry, 1971).

Unlike deciduous trees, in other species called evergreens, the leaves endure for several years (usually 2 or 3), then detach themselves at different times (Mauseth, 2006). These species are an example of a slightly different evolutionary path in comparison with deciduous trees, but there are some points in common: evergreens enter dormancy at the end of summer, lowering photosynthetic rates and also have a requirement in cold in the winter. To overcome frost stress, which could freeze tissues with potential cell damage, these species have developed ad hoc adaptations. For example, some studies have shown that the thickness of the leaves in the (broad-leaved) species that grow at higher elevations and exposed to lower temperatures is more than that of the lowland species. Evergreen conifers include some of the most frost-tolerant tree species, with some species that can survive as low as -60°C. Conifer needles take advantage of many of the cold acclimatization strategies used by other broadleaf species (e.g. supercooling, modifying membrane composition), but also have thick cuticles that protect against abrasion and drying caused by snow and strong winds; moreover, the tracheids in the conifers have smaller diameters than the vessels of the deciduous trees, limiting the embolisms induced by the freeze/thaw cycles (Roden et al., 2009). The needles of many conifers are then able to take up water from fog, rainfall or melting snow. This absorption appears to play an important role in conifers, for the recovery of hydraulic conductivity in late winter and early spring, even when the soil is still frozen (Hacke et al., 2015).