The root graft, a beautiful example of collaboration

In the common imagination, each tree is seen as a distinct entity, which competes with contiguous plants for space, light, water and nutrients. This traditional conception is radically changing and more and more space in the scientific research is given to complex issues, which regard the intimate connection (sometimes at a microscopic level) of the individual tree with its context. A splendid example of these interactions is natural root graft.

What is a root graft

Root graft is the formation of an interconnection between roots of the same plant, between roots of different plants of the same species, or, less frequently, between roots of different species. This phenomenon occurs naturally when two compatible thick roots are so close to each other that, as they grow, they begin to put pressure on each other, until they join. With time, the union, initially only mechanical, becomes functional with the formation of a sort of vascular continuity: the roots establish a new single vascular cambium and start to share the conductive elements of the phloem and the xylem (Larson, 1994). With the root graft the two plants can, therefore, share water, mineral salts, growth regulators, sugars, etc. but also exogenous components such as fungal spores or herbicidal substances.

There are many plant species capable of root grafts, but most studies have focused on Quercus rubra, Pinus pinaster, Pinus strobus, Picea abies, Fagus sylvatica and Platanus hybrida (Danjon et al., 2013). Many factors can influence the success of the formation of a root graft: besides the compatibility between the two roots, there is also the closeness of the two trees, the morphology and the root density, the type of soil (the intraspecific root grafting occurs with greater frequency in shallower soils), soil moisture and chemical inhibition by roots exudates (for further information, https://drp.bio/en/the-unknown-inhabitants-of-the-soil/; Graham and Bormann 1966, Fraser et al. 2005).

The advantages of root grafts

The benefits of root grafts can be numerous, and they compensate for the energy investment for their formation. In 2011, Lev-Yadun made an exhaustive list, including interesting personal hypotheses; the following is an extract:

– root graft can strengthen the root system and lead to better anchoring; this translates for example into a mechanical support useful in wind resistance;

– for plants that reproduce vegetatively, the probability that the “nearby” plant represents a descendant of the same population is high: in this case, the intraspecific root graft may support the survival of its own genotype;

– between plants that reproduce sexually, cooperation through intraspecific root grafts can increase the reproductive success of the species, supporting plants of the opposite sex;

– in the case of attack by certain parasites, the root graft can be very useful for maintaining a regular growth. An important example is given by Salomón et al. (2016): the researchers carried out a research in the Quebec forests and discovered that the growth of Picea mariana remained stable during the attacks of the Choristoneura fumiferana Clem defoliator, thanks to the roots grafts. 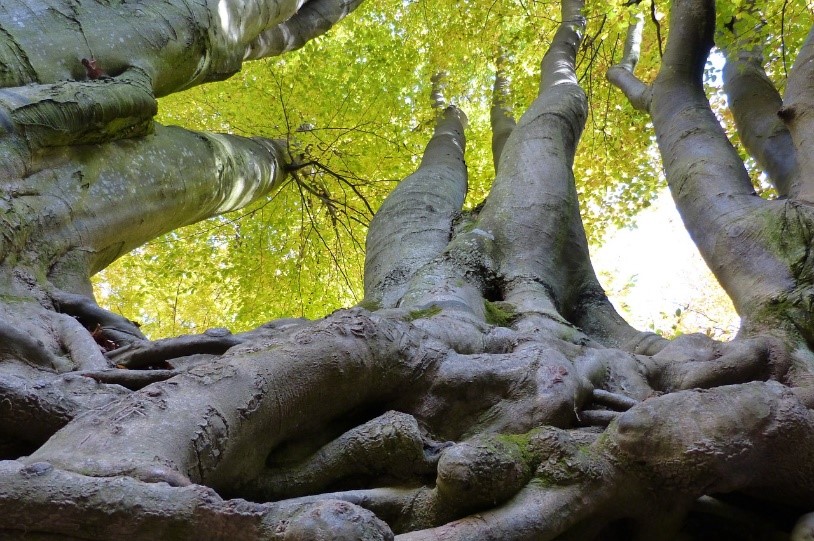 But what happens when one of the two tree is heavily damaged?

In case of loss of the crown, for example, due to a strong storm, snow load or fire, the stump can survive for long periods, even centuries, thanks to the exchanges at the level of the root grafts; this sort of parasitism has already been reported for about 200 species (Graham and Bormann, 1966). In 2007, Tobin et al. found that a significant percentage (from 2 to 11 %) of Picea sitchensis stumps in some forests in the Irish mid-land were callusing and explained this situation as the result of root grafts with neighbouring trees. In the long run, the surviving tree may benefit from keeping the stump alive because this stump, for example, prevents the occupation of a certain soil space by other species that could compete for water, minerals and light (Lev-Yadun, 2011).

But root grafts can also be seen as a “double-edged sword”. The benefits are indeed lacking when certain species are attacked by potentially lethal pathogens that can be transmitted through the root grafts itself; this is the case of certain viruses (Jones, 2018) or of many fungi such as, for example, Phytophthora lateralis, Fomes annosus, Polyporus schweinitzii, Endothia gyrosa, Poria weirii, Armillaria mellea, Verticillium spp. and Ceratocystis fagacearum (Epstein, 1978). In some situations, the incidence of the phenomenon can become really evident, as in the case of the canker stain of plane: the pathogen, Ceratocystis platani, can spread from one plane to another through root grafts (Montecchio L., 2016). For this reason, the Italian legislation requires the removal of the stump after the falling of the infected tree. Another special case is that of the fungus Ophiostoma ulmi, the cause of Dutch elm disease, which killed at least 10% of the European elm population. The most important route of transmission is represented by beetles of the genera Scolytus, Pteleobius and Hylurgopinus, which passively carry the fungal spores on healthy trees; however, some researches showed that infections through root grafts usually kill the tree much faster than those caused by vector insects (CABI, 2019).

In conclusion, the ecological significance of root grafts has not yet been fully clarified. The sharing of resources and secondary compounds among the trees could challenge the classic concept of competition (Begon et al., 2006; Tarroux and DesRochers, 2011). Nevertheless, many researchers agree that root graft is not an accidental consequence of the proximity of two roots, but that it may represent an evolutionary advantage for the forest stands themselves (Tarroux and DesRochers, 2011). Because, as the famous biologist Theodosius Dobzhansky used to say, “Nothing in biology makes sense except in the light of evolution“.